DO YOUR FINGERS STINK FOR JESUS? 3 Principles For Missional Living! - A Guest Post by Jay Moore

Many years ago I was attending a church growth conference and listening to one of the speakers talk about evangelism and the need for pastors to lead their churches to reach the unchurched of their communities. During his session he made a statement that really caught my attention! Actually he used two metaphors in one sentence that totally grabbed my imagination and intrigued me. He said,
"God has not called us to be KEEPERS OF AN AQUARIUM but to be FISHERS OF MEN!" 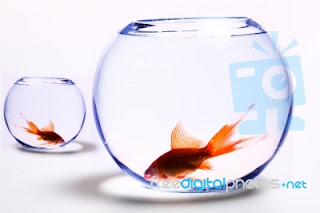 The Bible verse that inspired this saying was taken from Matthew 4:18-21 where Jesus was calling Peter, Andrew, James and John to be his disciples. Read what the Bible says:

"As Jesus was walking beside the Sea of Galilee, he saw two brothers, Simon called Peter and his brother Andrew. They were casting a net into the lake, for they were fishermen. 'Come, follow me,' Jesus said, 'and I will make you fishers of men.' At once they left their nets and followed him. Going on from there, he saw two other brothers, James, the son of Zebedee, and his brother John. They were in a boat with their father Zebedee, preparing their nets. Jesus called them, and immediately they left the boat and their father and followed him." (NIV)

Like I said the statement from that speaker really caught my attention and I couldn't stop thinking about it. Truthfully I can't remember anything else he said that night but I really didn't need to because through that one statement God taught me three important principles and more about what it means to live a missional life. When I compared those two metaphors a stark contrast began to form creating a North Star that would guide me and help keep me on track as I intentionally pursued living a missional lifestyle. Here are some of the contrasts between those two metaphors:

Keepers Of Aquariums Like To Display Fish But Fishermen Love To Catch Fish: The purpose and goal in having an aquarium is to create a beautiful underwater exhibit that can be enjoyed and shown to family and friends. People who have aquariums go to great pains and expense to get just the right color of rocks, landscape, decorations and fish to create this underwater world. They have to pump in air, provide and feed the fish daily and make sure the algae is cleaned off. But it's not a natural environment for the fish! Those fish were not originally created to live in an aquarium isolated from the natural design of God. It is for our own pleasure and purpose that we create this alternative world and then place the fish in it to live.

Fishermen on the other hand don't care about making things look pretty or showing off pretty little fish. The only goal of a fisherman is to catch fish! I have seen guys out fishing who catch fish after fish and then just throw them right back in the water. I asked a man once why he did that and he said, "I just like to catch them." It's the thrill of the hunt and the joy that comes from being able to outwit another animal.

The Missional Living Principle: The call to follow Jesus is not a call to create a religious bubble to isolate Christians away from the world but instead to enter into the world of those who are still lost in sin in this spiritually dark world.

For too long now the church in North America has created a church life that more resembles an aquarium where we've built beautiful buildings, with stained glass windows, cushioned seats, with fancy lighting and sound equipment. These building are filled with members who appear to have their lives all together with their picture-perfect families and their successful jobs.

The church of North America has created a Christian alternative to just about everything that society has to offer. From music festivals, dating services, radio programs; TV programs, schools. Just about anything you can think of we have a Christian alternative. It's almost as if we are intentionally trying to keep Christians away from those who are lost in the world.

But that's not what we are called to do! Christ never commanded us to create an alternative Christian culture that appears perfect and uninfected by the world! No! His command and call to Peter and the other three were to come follow me and I will make you fishers of men. Our call is to reach people for Jesus! Period! I don't care what you're doing, whether it be singing in the choir, politically protesting for some Christian agenda, or serving on the building and grounds committee of your church, IF YOU'RE NOT REACHING PEOPLE FOR JESUS YOU'RE NOT DOING YOUR JOB! PERIOD! 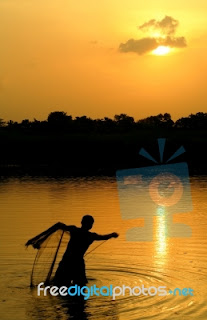 Keepers Of Aquariums Don't Get Into The Aquarium With Their Fish However Fishermen Love To Get Into The Water With The Fish: When it comes to the home variety of aquariums the most that any person will get into the aquarium is the putting of their hands into it and that's just for the purpose of cleaning the aquarium, readjusting the decorations or to catch one of the fish. For the most part the only interaction with the fish is the admiration of how pretty they are.

Fishermen on the other hand will do whatever it takes to catch the fish which includes getting into the water where the fish are. Once while I was in Texas I met a guy who loved going fishing for catfish. However, his particular method was completely different from anything that I had ever heard of before. This guy would actually squat down into the water and then reach his hands down deep into the mud where the catfish had burrowed themselves, grab them by the gills and pull them out. He said there were times when the fish fought so hard that he would fall down into the water face first. Now I've heard of guys who really get into fishing but this guy took it to a whole new level and literally got all of himself into the act of fishing. NOW THAT'S WHAT I CALL A FISHERMEN!

The Missional Living Principle: In order to be an effective Fisher of Men you have to be willing to go where the lost people are and hang out with them. You can't isolate yourself from them and expect to reach them for Jesus. Some of the people that Christ is calling us to reach are not swimming near the shore where you can reach them with a rod and reel. If we are to effectively reach many of these people we will have to get into their world, go where they hangout, and show them unconditional love and acceptance.

Isn't that what Jesus did for us? Didn't he leave his home in Glory, humble himself taking on the form of a man, born to poor parents and live among us as one of us but yet without sin or condemnation to those who were in sin? When Jesus called Matthew to follow him what did Matthew immediately do? He left his job and followed Jesus. The next thing he did was to throw a party for all of his friends to come over and meet Jesus. And guess what? Jesus attended the party and everyone at the party, except the religious hypocrites, had a great time. Jesus loved hanging out with sinners! Why? Because that's why he came! Jesus own words to Zacchaeus, another tax collecting sinner, verifies it. Jesus said to Zacchaeus, "For the Son of Man has come to seek and to save that which was lost". Why did Jesus come? To seek and to save! Jesus also said to his disciples at a different time, "As the Father has sent me so send I you." It can't be any plainer than that! We have been sent to carry on the same mission that Jesus began of seeking and saving those are lost. But in order to do that we have to be willing to get into the world where sinners live and not pass judgment on others who do.

Keepers Of Aquariums Like To Keep Things Nice And Clean But Fishermen Love To Get Dirty And Smelly: People who own aquariums want to keep things looking nice and neat. They don't want the algae to grow and overtake the aquarium, they don't want their decorations to be uprooted and they surely don't want dead fish floating around. The goal of an aquarium is to create a perfect underwater world that everyone can marvel at.

The Missional Living Principle: If you're going to get into the water where fish live you are going to get a little smelly. That doesn't mean you are backsliding or becoming worldly. What it means is that your outlook and perspective of what it means to live as a Christian changes. You understand the need to be in the real world and not in an artificial environment. It means that your speech and vocabulary, though not cursing, sound more like the world than it does in the religious bubble we've created. It means that the style of dress you have will look more like those who live in the real world.

Personally I love it when unchurched people who meet me for the first time are completely surprised to find out that I am a Baptist preacher. The looks on their faces are priceless. Many of them say they would never have thought that they would be talking to a preacher like he was just an ordinary guy. I also enjoy meeting Christians for the first time who hold to a certain stereotype of how Christians should dress or talk. I often encounter confused looks and many times judgmental attitudes.

Adam Sandler and Drew Barrymore made a movie together a few years ago called 50 FIRST DATES. It was a movie about a girl who had been in an accident where she suffered a brain injury and no longer had short-term memory, as a matter of fact every morning she woke up she forgot everything that happened the day before. As a result everyday Sandler's character would have to get the girl to fall in love with him again. In one particular scene where the boy was trying to once again get the girl to fall in love with him she said that his hands smelled like fish. He quickly began to apologize and said that his job required him to handle fish. The girl told him not to apologize because she liked the smell because it reminded her of her father who was a fishermen and that the fish smell always brought back fond memories. At that point she grabbed his hands and brought them close to her nose and starting smelling. I think Jesus is like that! I think Jesus loves the smell of his disciple's hands that stink of the sinners whom they have rescued and caught for him! 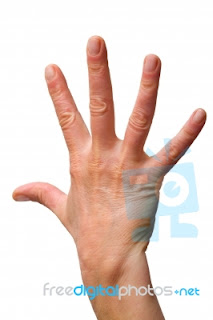 Jesus loves the smell of his disciple's hands that stink of the sinners whom they have rescued and caught for him.

So let me ask you: How stinky are your fingers? When was the last time you actually got into the world to seek and lead others to salvation in Christ? Do you thing the church should be a place to show off pretty little christians who live in a prefabricated spiritual bubble away from the rest of the world?


DON'T FORGET JESUS SAID THAT AS HE WAS SENT BY THE FATHER SO HE NOW SENDS US.
BUT SENDS US WHERE?


BACK INTO THE WORLD!

So I Say,
"Let's Get Our Hands Stinky For Jesus!"

To find this post in its original form, go to: Missional Meditations
Posted by Dr. Terry Dorsett at 8:30 AM