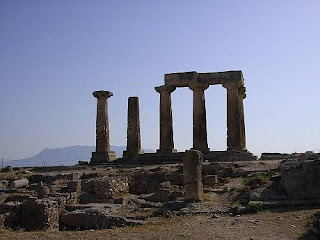 As I have prepared to move from Vermont to Connecticut to engage in an aggressive church planting ministry, I have been thinking a lot about Paul’s missionary journeys. I have been particularly drawn to Acts 18:1-11 where Paul leaves Athens, which was very needy for the Gospel, to do ministry in Corinth, which was also very needy for the Gospel. Walk with me through these verses and consider what God may be saying to us in regards to evangelism and church planting.


Verse 1 - Paul left from Athens and went to Corinth.
•          In Athens Paul had debated the Epicurean and Stoic philosophers in an effort to help them realize that religious rituals had no value unless a person had a meaningful relationship with Jesus Christ.
•          Paul then went to Corinth, which was another major city in Greece, and a political and commercial rival of Athens.
•          Athens was known for its culture.
•          Corinth was known for i’s sexual permissiveness.
•          In that day, if people wanted to insult someone else’s morality, they would call the person they wanted to insult a “Corinthian.”
•          Though these cities were very different, the people in both of them needed Jesus Christ.

Verse 2 - Paul found a Jewish man named Aquila, a native of Pontus, who had recently come from Italy with his wife Priscilla because Claudius had ordered all the Jews to leave Rome.
•          In the middle of this messed up city, Paul found a godly couple.
•          Aquila was a Jewish Christian and a successful businessman.
•          He was married to Priscilla, who was from distinguished and high ranking family in Rome.
•          They had been forced out of Rome by the King, whom the Romans called Caesar.
•          Little did Aquila and Priscilla know how God would use them to help start a new church.
•          Sometimes we find ourselves in less than ideal situations due to circumstances beyond our control. In those moments we should strive to be a bright light for Christ in a dark place.

Verse 3 - Paul came to them, and being of the same occupation, stayed with them and worked, for they were tentmakers by trade.
•          Paul found Aquila and Priscilla through their joint business skills, which was making tents.
•          Though Paul was highly educated and a recognized leader in the church, he often worked a second job to help support his ministry. He realized the local church might not be able to meet all his living expenses.
•          Today we call this “bivocational” ministry.
•          Bivocational ministry is hard because the pastor is working two full time jobs.
•          Pastors who are willing to make these sacrifices are essential to new churches being started and the Gospel getting to challenging places.

Verse 4 - Paul reasoned in the synagogue every Sabbath and tried to persuade both Jews and Greeks.
•          Notice that Paul “reasoned” with people.
•          Paul was not trying to “argue” people into heaven. He was just trying to talk to them about the real life implications of spiritual truth.
•          We should share our faith in reasonable ways.
•          Though sometimes people may become argumentative, that should never be our goal.


Verse 5 - When Silas and Timothy came down from Macedonia, Paul was occupied with preaching the message and solemnly testified to the Jews that the Messiah is Jesus.
•          Paul had been alone in his ministry for a period of time. But finally Silas and Timothy came to assist him.
•          Pastors often have to carry the load of ministry alone. But the goal should always be to train others to share the burden.
•          We must all be willing to do our part to help the church be healthy.
•          Notice Paul’s focus was on preaching and sharing Jesus with others. He did not lead every program in the church and make all the decisions himself.

Verse 6 - But when the Jews resisted and blasphemed, he shook out his clothes and told them, “Your blood is on your own heads! I am clean. From now on I will go to the Gentiles.”
•          Even though Paul tried to reason with the Jews about who Jesus was, some of them did not accept his ideas.
•          The Jews resisted Paul.
•          The Greek word used here is “antitassomai” which means “organized opposition.”
•          The word is only used one time in the entire book of Acts and indicates that Paul’s enemies went out and purposefully organized others against Paul. They were trying to stir something up.
•          God’s enemies are organized, so God’s people must be organized as well.
•          Though we do not want to be overly bureaucratic, being organized is essential for increased effectiveness in serving the Lord.
•          That is why churches should be part of a denomination. That connection helps churches do things in an orderly way.
•          That is also why churches should support groups that are organized for specific faith based causes such as Care Net and Christian radio.
•          Some of those who opposed Paul even went so far as to blaspheme.
•          Blaspheming is when a person speaks disrespectfully about God or about sacred things.
•          Blaspheming is a very dangerous thing to do.
•          When the people began to blaspheme God, Paul took off his outer robe and shook it out.
•          This was a symbolic way that Jews showed they were “done” with a person.
•          There came a time when Paul realized that trying to reason with them was a waste of time and energy.
•          Paul said that he would stop coming to the synagogue and instead spend his time in Corinth sharing Jesus with the Gentiles.
•          Sometimes we have to make hard decisions about where to invest our energy.
•          While we do not want to give up on people who are genuinely trying to understand God more and change, when we realize that all a person wants to do is argue with us and attack God, then it is time to move on in that relationship.
•          We should invest our time, energy and resources in those who are genuinely interested in growing in their relationship with Christ.

Verse 8 - Crispus, the leader of the synagogue, believed the Lord, along with his whole household; and many of the Corinthians, when they heard, believed and were baptized.
•          Titius was not the only person who decided to follow Christ. Crispus also became a Christian.
•          Crispus was the leader of the synagogue and this must have been a very hard choice to make because he had to leave a lot behind in order to follow Christ.
•          Crispus was very wealthy and owned a large home. The church would eventually meet in his home for regular worship.
•          When Crispus made the decision to follow Christ, many other people in Corinth followed his example and also became Christians.
•          We never know how many people we influence through our own spiritual journey. When we walk in obedience to the Lord, many others will follow.
•          Though Crispus had been a leader in the Jewish religion, he was immediately baptized as an outward sign of his new Christian faith.
•          In regards to baptism, it is very important to notice the order in which it happened:
•          First, people heard the Gospel.
•          Second, people accepted the Gospel.
•          Third, people were baptized as an outward sign of their acceptance of the Gospel.

Verse 9 - Then the Lord said to Paul in a night vision, "Don't be afraid, but keep on speaking and don't be silent.
•          Though God most often speaks through the Bible, sometimes God speaks in unusual ways.
•          In this situation, God spoke through a vision in the night.


•          God told Paul not to be afraid of those who were resisting him, but to just keep on preaching the Word and not to be silent.
•          There are times in our lives when others will attempt to intimidate us into being silent about our faith.
•          We must be brave and refuse to be silent about the faith that we have in God.


Verse 11 - And Paul stayed there a year and six months, teaching the word of God.
•          After all the opposition that Paul faced, he still stayed another 18 months preaching the Word of God (Bible) in Corinth.
•          Considering that even under good conditions Paul rarely stayed more than a few weeks in any one city, a stay of 18 months was an incredibly long stay for Paul.
•          When God begins to work, we never know how long such a special anointing will last.
•          But when God does something cool, we must alter our plans, adjust our schedules and join God in His efforts.
•          The last thing we want to do is miss something BIG that God does.