Progressive When We Want To Be 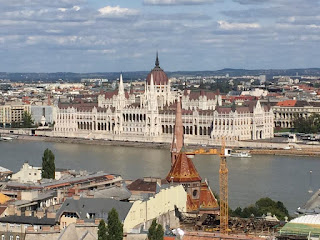 Last month my son and I spent a week traveling across Central and Eastern Europe on a bus. It was a remarkable experience and helped us learn a lot about history and also a lot about the European perspective on life.

One thing that we learned was that Europeans are only progressive when they want to be. They can also embrace many regressive ideas regardless of how liberal of a reputation they have. For example, when it comes to income taxes, several countries have a “flat tax” where everyone, regardless of income level, pays the same percentage of their income in taxes. And those taxes are quite high. For example, France has the highest income tax in Europe, at 57%. Austria’s rate is 54%. Most other European countries are at 50% or more. The “low tax” nations are mostly in the high 40% range. In most of those nations, everyone pays the same rate. In America we have different rates for different income levels, with the concept that those who make more money can afford to pay more, a much more progressive system. Another example is how liberal Europeans have made very few allowances for people with disabilities. There are very few handicapped accessible areas, especially in historical buildings. For them, the historical nature of the building trumps the importance of all people being able to enjoy the building. As a result, for most handicapped people, many of the buildings are Europe are simply impossible to navigate.

But the point of my post is not to debate the fairness of flat tax versus varied tax rates or to extoll the virtues of the American Disabilities Act which requires equal access for all in public places. The point of my post is to demonstrate that we all tend to be “progressive” when we want to be, and ONLY when we want to be. We tend to think we are enlightened in our viewpoints about things that are important to us but have huge blind spots that we fail to see on issues that we may think has no direct impact on us. We tend to not like it when others point out those blind spots to us. We defend our enlightened views while in reality we are glaringly unenlightened about so many other things. Perhaps we would be healthier people, and a healthier society if we were more willing to hear other people’s perspectives on how our decisions impact their lives. We may not always agree with each other. And honestly, we may not be able to make everyone happy. Someone might even “lose” some benefit or right that they would like to have. But at least if we all learned to listen to each other instead of ignoring, or worse, yelling, at each other, we might at least understand how a decision on some issue actually impacts the lives of the people around us. And that would be enlightened indeed!