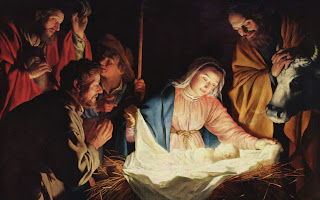 …. But in the future he will bring honor to the way of the sea, to the land east of the Jordan, and to Galilee of the nations. The people walking in darkness have seen a great light; a light has given to us, and the government will be on his shoulders. He will be named Wonderful Counselor, Mighty God, Eternal Father, Prince of Peace.
Isaiah 9:1b-2, 6

When this scripture was written the nation of Israel was in a time of war. It was a war that was not going well. In the midst of that time of anguish and despair Isaiah prophesied that one day a baby would be born. That baby would be the promised Jewish Messiah, the Prince of Peace. We know Him by the name of Jesus and the story of his birth is what makes the Christmas season so special to us all. But as is often true in Old Testaments prophecies, there is a second prophecy hidden within the first one.

The passage of scripture refers to the Galilee of the nations. The Hebrew word used for nations refers to everyone in the world who was not Jewish. Those non-Jews were lost in utter darkness. But Isaiah knew that one day they would have the same opportunity to accept the Jewish Messiah as the Jews did. They would be able to see the Light of Christ.

This prophecy has come true over and over again through the centuries and now the number of non-Jews who follow Christ is significantly greater than the number of Jews who do. The Gospel of Christ is being taken to remote corners of the world by all those non-Jewish believers in the Jewish Messiah. Only God could have brought such a miracle to pass.

While we rejoice in this centuries long miracle, the time has come for us to do our part to join God in fulfilling this prophecy for our generation. Each generation is responsible for taking the gospel to their peers both in their own nation and around the world. So now the stewardship of this prophecy has come to us. As we consider our Christmas activities, will it include opportunities to share our faith with those who are still in darkness? As we consider our Christmas giving, will it include donations to the Lottie Moon Christmas Offering and other gospel driven causes? Will we continue to fulfill the prophecy of Isaiah and help spread the Prince of Peace to the nations?

Dr. Terry W. Dorsett has been a pastor, church planter, denominational leader and author in New England for more than 20 years. He is a happy husband, a proud father and adoring grandfather. He is a cancer survivor and believes that God works powerfully through times of suffering. He writes extensively and you can find all of his books at:
http://www.amazon.com/Dr.-Terry-W.-Dorsett/e/B00405U4NY
Posted by Terry W. Dorsett at 6:47 PM