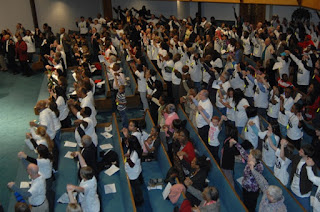 Hebrews 10:24-25 “And let us watch out for one another to provoke love and good works, not neglecting to gather together, as some are in the habit of doing, but encouraging each other, and all the more as you see the day approaching.”

The first church I served after I graduated seminary ran between 200 to 250 in worship on Sunday morning. But we had over 900 members on the roll. That means we had three times as many members missing on a typical Sunday than we had present. While some of those missing members were elderly and no longer able to attend, hundreds of them were simply missing in action. Some of those missing members were still in the community and would occasionally show up for Easter or Christmas services. But many we had not seen in years. I am not sure the FBI could have found half of our missing members! Yet they remained on our membership roll. I remember wondering why we just didn’t cross all those names off our roll.

Though at the time I would not have wanted to admit it, I suspect that the reason that we kept all those missing members on the role was because it sounded a whole lot better to say we had more than 900 members than to admit we only had 250. Years later I look back on that experience and realize that the goal of our church was not just to add names to the roll, it was to multiply Christ-followers through evangelism, discipleship and missions. Adding names to the roll did not accomplish that goal. For a name on a roll to have meaning and purpose, the individual represented by that name has to be really involved in the church and growing in their faith. Our church had a lot of names on a roll, but most of those names meant little to the life and vitality of that church or to accomplishing the mission God had given that church. As harsh as it may sound, those names were empty of meaning and value.

There are millions of people across America who have their names on the roll of a church but who do not attend with any degree of regularity. My encouragement to those who find themselves in such a situation is to return to your church, roll up your sleeves and become active. Not just active in the organization of the church, but active in fulfilling the mission of the church. Be the Christian you claim to be! My encouragement to those who are in leadership of a church is to ask yourselves if it is time to meet with your long-term inactive members to determine their real commitment to Christ and the mission of your church. If they are no longer committed to the mission of the church, remove their names from the roll. Not out of anger or spite, but out of integrity and honesty. Membership should mean something. But if we continue to carry more names on the roll who are not active than who are, we have devalued membership and made it mean little. We must fix this. It might make our churches smaller on paper, but is highly unlikely to reduce the number of people actually involved. In fact, I think it will increase the number of those who are involved because when inactive members are challenged to become active again, some of them will rise to the occasion and accept that challenge. And that is good for both the individual and the church.

Lord, help our connection to our church be meaningful both to the church and to us. Amen.

Dr. Terry W. Dorsett serves at the Executive Director of the Baptist Convention of New England. He has been a pastor, church planter, denominational leader and author in New England for more than 20 years. He is a happy husband, a proud father and adoring grandfather. He is a cancer survivor and believes that God works powerfully through times of suffering. He writes extensively and you can find all of his books at: