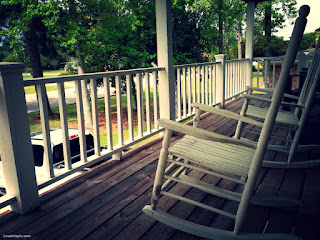 The other day I was sitting with my father in law in a rocking chair on his porch. Mr. Jonas has been a committed Christian for many years, though by his own admission there was a period of time during his younger days when he didn't walk with the Lord as much as he would have liked. Since retiring, he has become involved in a number of local ministries and has also been able to participate in several mission trips to Haiti. During our conversation he said that he realized his time to serve the Lord was growing short as he advanced in age and that from this point forward he "didn't want his hands to touch anything that would not touch eternity."

Since our conversation I have been thinking a lot about that statement. I have been asking myself how many things do MY hands touch that actually have eternal value. I think it is so easy to get busy doing things that may be okay to do, but which have no actual eternal significance. I rejoice that my father in law came to learn this valuable truth and has been able to apply it to his life even if it was not until he retired.

I have been wondering what would happen if Christians could learn this truth at age 55, or 45, or 25 instead of at age 65. Imagine learning this truth at age 15! Imagine having an entire life ahead to touch eternal things. Wow, what a life that would be!

The only way to have that kind of life, is to start living it today!

Dr. Terry W. Dorsett is a pastor, husband, father and author who has been serving small churches in New England since 1993. He often finds heavenly truths in everyday experiences and writes about them in his blog.
Posted by Dr. Terry Dorsett at 6:37 PM