Verse 33 - When they arrived at the place called The Skull, they crucified Him there, along with the criminals, one on the right and one on the left.
• This verse troubled archaeologists for centuries because the “traditional” site on which the Roman Catholic Church has built the Church of the Holy Sepulchre does not have a “place of the Skull” as described in the Bible.
• Many people longed to know for sure where the place called The Skull was.
• In 1842 a German Theologian named Otto Thenius first proposed the idea that an outcropping of rock outside the city, which is now known as "Skull Hill," was right beside the actual site of the crucifixion.
• This upset the “traditionalists” a lot.
• But the site was outside the city, looked like a skull and seemed to better fit the biblical description of the place where the crucifixion took place.
• However, few people took Otto Thenius seriously because his ideas went against the “tradition” of the established church.
• Otto Thenius’s idea lay seemingly dormant until the British General Charles Gordon began to publish similar ideas in 1882.
• General Gordon was so well respected in British Society, that people began to take the idea seriously.
• In 1893 the Garden Tomb Association was established in London by some lay people.
• In 1894 they purchased as much of the property around The Skull as possible.
• Kay and I visited the spot in January 2011.
• Here are two pictures of Skull Hill, just outside Jerusalem: 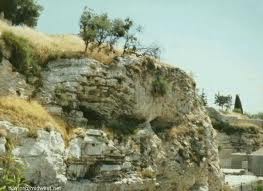 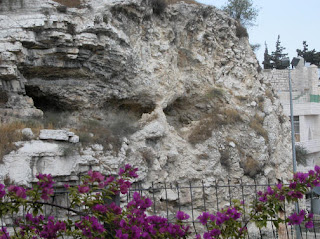 Verse 34 - Then Jesus said, "Father, forgive them, because they do not know what they are doing."
• Even as Jesus was terribly tortured, mocked unmercifully, and hung on a cross, He begged His Father to forgive the sins of those doing it.
• If forgiveness was that important to Jesus, how important should it be to us?
• Perhaps this Resurrection Season might be time to let go of old grudges and experience the peace that forgiveness brings.

Verse 39 - Then one of the criminals hanging there began to yell insults at Him: “Aren't You the Messiah? Save Yourself and us!”
• Jesus was hung between two common criminals.
• Though the Romans may have meant this as an insult to the “King of the Jews,” somehow, I think Jesus took it as a complement.
• Jesus liked to spend time with “common” people, why not also die with them?

Verse 40 - But the other answered, rebuking him: "Don't you even fear God, since you are undergoing the same punishment?
• Though one criminal mocked Jesus, the other knew who Jesus was.
• Though it was almost too late, this man realized who Jesus was.
• We often stereotype “messed up” people, thinking they could not possibly understand who Jesus was. But they often can.

Verse 41 - We are punished justly, because we're getting back what we deserve for the things we did, but this man has done nothing wrong.”
• This criminal realized that he deserved his punishment.
• How often do we justify our sin and claim that we do not deserve its natural consequences?
• We could learn a lesson from this criminal!!!
• He also realized that Jesus was innocent.
• That was a deep theological statement.

Verse 42 - Then he said, "Jesus, remember me when You come into Your kingdom!”
• The criminal cried out to Jesus for help.
• The criminal asked the Lord to remember him when Jesus got to heaven.
• Some might argue that the criminal did say the “right words” or pray the “sinner’s prayer correctly.”

Verse 43 - And He said to him, “I assure you: Today you will be with Me in paradise.”
• But Jesus assured the criminal that he would be with Jesus in heaven that very day.
• The devil would like us to doubt our salvation by telling us we did not do it right.
• All that is required for salvation is to acknowledge our sin, turn from it and cast all our hope on Jesus.
• If we did that in our hearts, we did it right regardless of what words we used.

Conclusion:
• Traditions can be wrong, but the Bible is always right.
• Jesus modeled forgiveness, we must also practice forgiveness.
• Even “messed up” people can come to Jesus.
• Salvation is having a heart that totally trusts in Christ alone instead of trusting in human rituals, traditions or religious activity.
• Do we have salvation? Are we sharing it with others?
Posted by Dr. Terry Dorsett at 8:20 AM