Verse 1 - On the first day of the week, very early in the morning, they came to the tomb, bringing the spices they had prepared.
•             The resurrection of Jesus Christ happened on Sunday, which is the first day of the week.
•             In the Old Testament, the Jews worshipped on Saturday, which was the Sabbath.
•             Some people still worship on Saturday, and that is okay. But in the New Testament, many believers began to worship on Sundays in honor of Christ’s resurrection.
•             What matters more than the day, is that we regularly worship the Lord. (see Romans 14:5-6) Far too many people have allowed themselves to get so busy with life that they no longer worship the Lord regularly.
•             Though any amount of worship is better than no worship, to really gain the benefits of worship, we must be involved in it regularly.
•             Some ladies came to the tomb of Jesus early in the morning. The Gospel of Matthew says it was 5 AM. These ladies started their day by coming to Jesus.
•             This is something we should consider as well. Though we can pray and read our Bible any time, when we start our day with a quiet time with God, it makes the whole day go better.
•             The ladies brought spices in order to preserve the body. They did not have modern embalming techniques like we do today. Instead they would preserve a body using natural spices.
•             The fact that the ladies come to the tomb with spices to preserve the body means that they were not expecting Jesus to rise from the dead. They thought they would find His body in the tomb. What a shock they were about to get!


Verse 2 - They found the stone rolled away from the tomb.
•             In that time period, they did not dig graves in the ground like we do today. They buried people in caves instead.
•             They would roll a huge stone in front of the mouth of the cave to keep animals away from the body and to keep grave robbers from stealing the personal items families sometimes buried with the body.
•             The stone would have been large enough to cover the entrance, which would have been about waist high for an adult. The stone would have been fitted into a slot in the ground that sloped down. That made the stone easy to move as it rolled down into the slot to block the entrance, but very difficult to get back out.
•             It would have taken quite a force of strong men to open the tomb. There is no way these ladies would have been able to move it themselves.  The Gospel of Mark tells us the ladies actually discussed how they would move the stone as they walked to the tomb. They did not know the answer, but they went to the tomb anyway, trusting that somehow God would work it out.
•             When they got to the tomb, the problem was already solved because the stone had already been rolled away.
•             We all have questions about God and the world around us and wonder why certain things happen. Sometimes those questions are like giant stones that keep us from believing in the Lord as firmly as we should. We must journey toward Jesus anyway, not knowing how our questions will get answered, but trusting that God will work them out.


Verse 3 - They went in but did not find the body of the Lord Jesus.
•             The ladies were expecting to see the dead body of Jesus. In their minds, it was all over and all that was left to do was put the ritualistic spices on the body. It was not until that moment they realized that the adventure had just begun!
•             How many of us have written off “church” as being boring or just empty ritual?
•             While some churches may indeed seem more like tombs, there are many churches that are vibrant and alive. We need to become involved in a vibrant church in order to have the strong faith that is needed to endure the difficulties of life.
•             Regular worship in a vibrant church and a daily quiet time of Bible reading and prayer will change our lives for the better.


Verse 5 - So the women were terrified and bowed down to the ground. “Why are you looking for the living among the dead?" asked the men.
•             The ladies were terrified by what they were experiencing.
•             An encounter with the divine should be encouraging. Sometimes it scares us because we do not know what the result is going to be. Sometimes we are afraid that we might become too spiritual if we let God into every area of our lives.
•             We do not need to fear what God is doing in our lives because God will always do the right thing.


Verse 6 - He is not here, but He has been resurrected! Remember how He spoke to you when He was still in Galilee.
•             The angels told the ladies that Jesus was not in the tomb. Jesus had come back to life.
•             This must have seemed like an incredible impossibility to the ladies.
•             People have always struggled with the concept of a dead person actually rising again from the grave. Can this actually be true?


Ten Proofs of the Resurrection of Christ:
1.              The Bible itself says the resurrection actually happened. For many Christians, this is the only proof they need.
2.              The resurrection is also well documented by numerous historical sources. Josephus, Ignatius, Justin Martyr and Tertullian were all historians who wrote about the resurrection of Christ in the first 100-150 years after it happened.
3. There were numerous eyewitness of the resurrection who both talked and wrote of their experiences. At one point, Jesus appeared to 500 people at once. If the resurrection was fake, someone would have exposed all these people immediately.
4. Though a rumor started that the Roman soldiers had hidden the body of Jesus. If this had happened, they would have been killed for not doing their duty of protecting it.
5. All but one of the apostles died terrible deaths for their faith in the resurrected Jesus. If they had known it was a fraud, they would have never endured such torture.
6. The community at large had turned against Jesus and His followers. Why would thousands of those same people suddenly become Christians unless they had seen Jesus after the resurrection, or personally knew someone who had seen Him?
7. For 2000 years skeptics have set out to disprove the resurrection and after examining all the evidence, a vast number have decided to become Christians.
8. If Jesus did not rise from the dead, where is His body? All that the Roman government or the Jewish priests had to do to stop the spread of Christianity was produce the body. They never did, because there was no body to produce!
9. There have been thousands of documented miracles that have happened since Jesus was resurrected that prove the reality of His power.
10. Many people in this room can give testimony of how Jesus changed their lives. If He were not alive and in possession of real spiritual power, how could He change the lives of people sitting all around us?

Buddha was born around 563 BC. He taught that mankind could find enlightenment, be reincarnated and find peace within themselves. He died around 483 BC. His tomb is occupied.

Confucius was born around 551 BC. He taught that rituals provide balance, we must govern ourselves first and we must respect our ancestors. He died around 479 BC. His tomb is occupied.

Muhammad was born around 570 AD. He taught that he was the last messenger of God and that good works lead to paradise. He died in 633 AD. His tomb is occupied.


Joseph Smith was born on December 23, 1805. He taught that what man is, God once was, and what God is, man may become, and that good Mormon men will populate a planet with own their spiritual offspring. He died on June 27, 1844. His tomb is occupied.
Charles Darwin was born February 12, 1809. He taught that mankind was just an animal that resulted from millions of years of cosmic accidents. He died April 19, 1882. His tomb is occupied.

Jesus Christ was born around 4 BC. He taught people to have a personal relationship with God through faith and said we should love our neighbors as well as our enemies. He died around 30 AD. His tomb is unoccupied!!!!!! 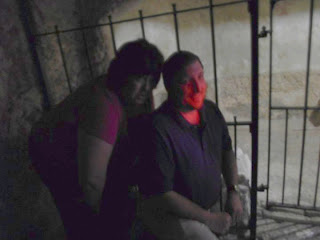 
BUT it all begins with a commitment to the resurrected Savior, Jesus Christ. Consider praying one of the two prayers below.
Dear Lord, I know I have sinned. I believe that You died for my sins and rose again to conquer my sin. I ask You to forgive me of my sins and I commit to turn away from them and serve You for the rest of my life, to the best of my ability. In Your name I pray, Amen.


Dear Lord, Though I have already asked You to forgive me of my sins and make me a Christian, I have sure not been acting like a Christian lately. Right now I turn back to You and recommit myself to You. With Your help, I will get it right this time. Amen.
If you prayed one of those prayers, leave a comment below so I can rejoice with you.
Posted by Dr. Terry Dorsett at 3:43 PM