Earlier this summer my daughter got married. She took most of her belongings with her and the little that remained has already found a new home. Her room is empty except for one dresser.

My middle son leased his first house (with three roommates) in August and cleaned out his room as well. His room is empty except for one desk. 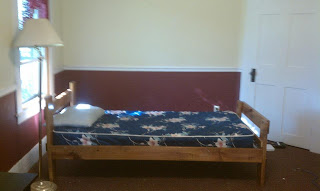 Yesterday I dropped my youngest son off at a college more than 400 miles away. I returned home a few minutes ago. I could not resist the urge to walk into his room and "remember" him. That was probably not a good idea. His room is almost bare, except for a few items he stacked in a corner and his bed. To be honest, I find it depressing.

I know I should not complain. I have three healthy children. Some parents have to take of children with long term disabilities and will never experience empty nest. I respect those parents a great deal, and would not want to trade places with them. But it still hurts to have my kids so far away. Some parents have lost a child to death. We almost lost our youngest son when he was four years old due to a severe car accident. I remember the wrenching pain in my chest when the doctor told me to tell him goodbye because I was not likely to see him again. I was in one hospital. He was being rushed to another. I remember the joy I felt when my wife called to say he was going to make it. I am filled with gratitude that all three of my children are alive. But it still hurts to have them live so far away.

All three of my children are walking with the Jesus. At least two of them want to follow the Lord in some type of full time ministry, and I think one day the third one will too. Many parents have watched their children wander from the Lord in their teens years, some never to return to their faith. I pray for my children to remember the love of the Lord they felt in our home. I pray for them to remain faithful to His calling on their lives. I really am grateful that they know and serve Jesus. But it still hurts to have them live so far away.

Many of my friends who have already experienced the empty nest tell me that after a week or two it gets better. I am looking forward to spending more time with my wife, she has always been my best friend. But, right now, it really hurts to have my kids live so far away.

As I sit on my porch listening to the wind in the trees, I wonder how God the Father felt as He sent His Son Jesus down to earth on a great mission to save the world. I know theologically that God is omnipresent, and I cannot pretend to know the depth of God's heart, but somehow, I think He said, "Wow, it hurts to have Jesus live so far away."