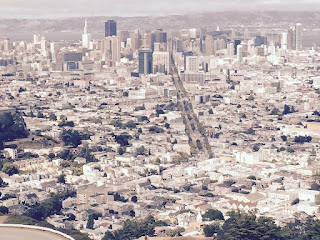 Luke 19:41-42 “And when he drew near and saw the city, he wept over it, saying, Would that you, even you, had known on this day the things that make for peace! But now they are hidden from your eyes.”

My wife and I spent a week in the San Francisco Bay area while I was co-teaching a class at Golden Gate Baptist Theological Seminary. We spent a Sunday afternoon exploring the city. Part of our explorations took us to Twin Peaks, which overlook the city. After driving up a road filled with hairpin turns, we were rewarded with amazing views of the city. We took some great pictures of the various neighborhoods from all over the metro area that could be seen from that vantage point.

In some ways San Francisco is a blessed area. The scenery is lovely. The economy is booming. The food choices are great (thought quite expensive). The city glitters at night and draws young people from around the world. But all that glitters is not gold. While we were there an innocent women was killed in a very public section of the city that is normally safe for tourists. We saw homeless people and beggars in many street corners. Churches are few, and often small. Property is so expensive that even middle class families with good jobs struggle to buy a home or rent something in a safe neighborhood. The disparity between rich and poor is unbelievable. 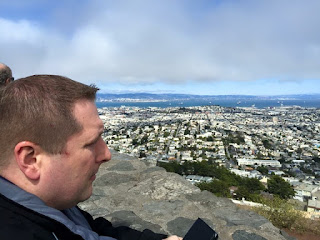 The greater San Francisco metro area has over 8 million people and only a small percentage of them attend an evangelical church on a regular basis. The same thing could be said about most of the larger cities across North America. When one considers the vast spiritual lostness in our cities, it is hard not to think about Jesus weeping over another city, in a faraway place, the city of Jerusalem. Jesus wept for Jerusalem because for all its greatness, it did not know peace. Though 2,000 years have passed, Jerusalem does still not know peace. Jesus spent a lot of time in Jerusalem trying to point people to the path of peace and proclaiming a gospel that brings peace to the soul. Few listened, but the ones that did changed the world.

Cities like San Francisco need peace that only Christ can offer. As we proclaim the Gospel in the great cities of our land, we may not get the quantity of responses that we would like, but if we find the few, like Jesus did, who respond with all their hearts, our world can once again by changed by the gospel of peace.

Lord, help us reach the cities with the life changing Gospel of Christ. Amen.