Why I Joined a Denomination

I have many fond memories of two churches I grew up in, one in Illinois when I was a child and the other in Virginia, where my family moved when I was a teenager. Those two churches shaped my spiritual growth and helped me understand my call to ministry and missions. But neither were part of a denomination. In fact, on more than one occasion I recall passionate sermons on why denominations were bad and how we should avoid churches connected to them. (One of those churches has since changed  their position on that issue and is now loosely connected to a denomination, but that is a subject for a different post.)

Growing up with a skewed view of denominations, it was with skepticism that I listened to one particular college professor who was also a bivocational pastor of a small church connected to the Southern Baptist Convention. He often talked about how his denomination enabled his church to do more than he had ever dreamed of in reaching both his community and the world for Christ. Regardless of my initial skepticism, after three years of classes with that professor, I began to rethink the whole denominational issue.

After a lot of thought and scripture study, I came to realize that the concept of denominations was great, basically a denomination is simply a group of churches working together accomplishing more than each could on their own. But what I continued to struggle with in my college days was how denominations were structured. Due to my firm belief in the local church as the primary spiritual institution through which God works, the idea that denominations controlled their churches by owning the church property, ordaining and assigning the pastors and requiring pastors to make vows of obedience to church hierarchy, was more than I could accept as biblical.

Before researching the subject adequately, I mistakenly thought that ALL denominations directly controlled their churches in these ways. After educating myself on the subject, I learned that there were a number of denominations who rejected such control mechanisms. In fact, I came to see that many denominations actually agreed with my position on local church autonomy, including the Southern Baptist Convention. When I graduated from seminary, weary of the isolationism that non-affiliated churches often immerse themselves in, I sought a position in churches connected to the Southern Baptist Convention. Not only did the SBC Baptist Faith and Message represent a conservative biblical view of theology, but their structure allows churches to be totally autonomous while also cooperating together to accomplish things they could not do on their own.

My connection to the Southern Baptist Convention has been a healthy one. After only three years of service to a SBC church in South Carolina, I was able to go to New England as a missionary. I now lead SBC work in New England through the Baptist Convention of New England. Who would have thought that a kid who grew up in "anti-denominational" churches would now be one of the leaders in a the largest evangelical denomination in America. Proof that God does have a sense of humor and can help us grow in understanding of biblical truth.

If your church is isolated and alone, instead of accepting the falsehood that all denominations are bad, do the research. You will learn that some denominations are indeed liberal. Some are indeed controlling. Some are not healthy. But there are a number that have remain faithful to the scriptures and have worked hard to balance local church autonomy with cooperative efforts. The Southern Baptist Convention is one of those. It is worthy of a second look. It is not perfect. No man-made organization is. But being isolated and alone as a non-affiliated church has its weaknesses too. For me, being connected to other churches of like faith and practice is vital to being part of God's plan for world redemption. I am proud to have become a Southern Baptist by choice, not tradition. I encourage others to do the research and make the same journey. 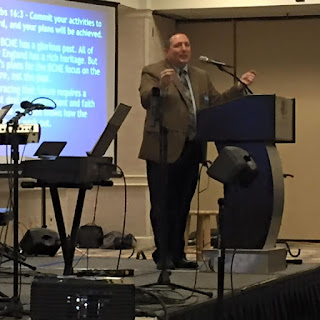 Dr. Terry W. Dorsett has been a pastor, church planter, denominational leader and author in New England for more than 20 years. He is a happy husband, a proud father and adoring grandfather. He is a cancer survivor and believes that God works powerfully through times of suffering. He writes extensively and you can find all of his books at:
http://www.amazon.com/Dr.-Terry-W.-Dorsett/e/B00405U4NY
Posted by Terry W. Dorsett at 6:30 AM