Observations from our Memorial Day Parade

Yesterday I enjoyed a Memorial Day Parade in West Hartford, CT. I enjoyed seeing the community come together in support of the families of veterans who gave their lives in service to our nation. It was very moving to hear the sustained applause that kept coming in wave after wave as the surviving veterans walked by. The police department, fire department and other community organizations also were walking in the parade. So I got to see a lot of community leaders all at once.


I could not help but notice that almost all the adult men in the parade were white. Policemen, firemen, veterans, almost to a man, were Caucasian. The reason that stood out to me was that since moving to the greater Hartford area two months ago, one cannot escape noticing the high degree of racial integration that exists in Connecticut. So it really stood out when suddenly all that diversity was gone and it was just a bunch of older white men, with a handful of white women, parading by. 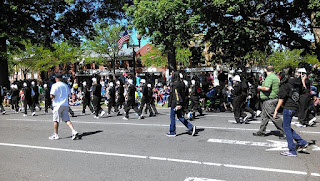 
This is important to take note of because that is the future of America. Though in the past racial segregation may have prevailed in our nation, and perhaps still does in certain population pockets, that is increasingly less true. More and more young people come from a variety of racial backgrounds. And young people really do not seem to mind. To them, it is about how good of a friend you are, not the color of one’s skin. From my perspective, this is a good thing.


Churches, and other faith based groups, that want to survive into the next generation had better come to grips with this reality. Though there is a place for ethnic churches when language barriers exist, increasingly the next generation is going to expect the church they attend to look like the marching band from the local middle school. And when churches can see that happen, we will be one step closer to the fulfillment of Revelation 7:9-10. Come, Lord Jesus, Come.
Posted by Terry W. Dorsett at 8:59 AM