Fathers and Sons and Worship 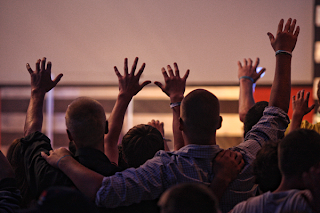 In my role as a denominational leader, I visit a wide variety of churches. A few of the churches have great worship services, a few not so great, and the majority are somewhere between great and not great. Recently I visited a church that has a more robust service with an excellent worship leader. As I was singing I was blessed to see many families around me worshipping as well. Then I made a startling observation that I have never noticed before. In all the families in which the father was singing, all their sons were singing too. In the families in which the father was not singing, neither were the sons. Once I noticed this in a couple of families, it caught my attention and I tried to observe as many men as possible to see how they were interacting in worship and what impact it was having on their sons. The more I looked, the more my initial observation was proven correct.


One family in particular caught my attention because there was no mother present. Perhaps she had to work that day, or maybe she was serving in the nursery, or perhaps it was a divorced family. I had no way of knowing where the mother was, but the father was there with his two sons, who appeared to be young teenagers. I noticed all three of them singing and taking part in the prayers and following along with the sermon quite well. In a day in which it seems that most men have checked out of being the spiritual leader of their home, here was an example of a dad who was succeeding, at least in some small measure, in being a spiritual example to his sons. And he was not just doing it because his wife was poking him in the ribs, since she was not even there. It was clear that he was there because he wanted to be, and from what I could tell, the sons did not seem to mind being there either, which is a miracle in itself if you know much about teenage boys and church!


I have wondered since witnessing this if the father and sons have openly discussed the importance of worship and why one should be actively engaged in it, or did the sons just learn by the father’s example? Either way, that dad has done something right and we need more dads like him.


So what about it men? Are we content to stay home while our wives and children go to church? Are we content to attend the service but mentally be planning our next round of golf or thinking up the roster on our fantasy football team? Perhaps it is time for us to reengage in active worship. Let us show our children, especially our sons, what it means for a godly man to approach the Heavenly Father in a God-honoring way. Let’s be men!

For tips on how to help your children or grandchildren enjoy church, read Dr. Dorsett's book, Mission Possible: Reaching the Next Generation through the Small Church.
Posted by Dr. Terry Dorsett at 6:56 AM