Esther 6:12-13 - Then Mordecai returned to the King’s Gate, but Haman, overwhelmed, hurried off for home with his head covered.  Haman told his wife Zeresh and all his friends everything that had happened. His advisers and his wife Zeresh said to him, “Since Mordecai is Jewish, and you have begun to fall before him, you won’t overcome him, because your downfall is certain.” 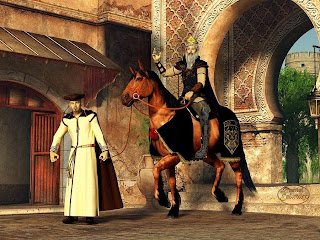 In the story of Esther, we meet Haman, who was an enemy of the Jews. Haman plotted genocide against the Jews, but had a special hatred for one particular Jew, Mordecai, who refused to bow down to him as he walked by.

In chapter six, the King realized that Mordecai once had done him a great favor that had not yet been rewarded, so he called Haman in and told him to go honor Mordecai for the unrewarded deed. Though Haman hated Mordecai, he had no choice but to do what the King commanded, even if he loathed every moment of it.

When Haman got home that night he whined to his family and friends about having to pay homage to Mordecai that day, the very Jew who had refused to honor him. He was expecting sympathy. But their answer to him was startling: “If Mordecai, before whom you have begun to fall, is of Jewish origin, you will not overcome him, but will surely fall before him" (Esther 6:12 NAS).

It is amazing that Haman's friends, who had no love for the Jews, recognized that the Jews were special and that Haman would not be able to stand against them. Whether Haman's friends had access to the Old Testament or not, they clearly understood the teaching of Genesis 12:3, where God promised Abraham, "I will bless those who bless you, I will curse those who treat you with contempt, and all the peoples on earth will be blessed through you."

Almost since the beginning of Jewish history, there have been those who have sought to destroy the Jewish people. Time and time again they have been persecuted, often with great enthusiasm. But through God's supernatural protection, the Jewish people have survived.

In our century, the media have somehow painted the Jews as the bad people of the Middle East. Any effort they make to defend themselves from far superior numbers of enemies gets spun to somehow make the Jews the aggressors instead of the victims. We may not always agree with the tactics that the modern nation of Israel uses against her enemies, but we should not be foolish enough to put ourselves in Haman’s place. The Jews are still God's chosen people, and if we stand against them, our fall is inevitable.

Lord, help us be a blessing to the Jewish people and remember that if we bless them, You will bless us, but if we curse them, then we will be cursed. Amen.