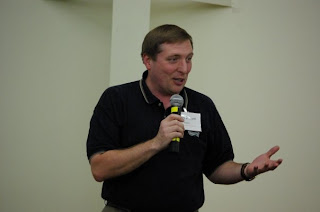 A sermon based on James 1:1-8 developed by Dr. Terry W. Dorsett.

Verse 1 - James, a slave of God and of the Lord Jesus Christ: To the 12 tribes in the Dispersion. Greetings.
• James was most likely the half brother of Jesus (Galatians 1:19).
• He was often called James the Just and is considered by many to be the first Bishop of Jerusalem.
• This book has caused controversy through the years in the Christian church because of its strong emphasis on doing good works.
• Some have misunderstood the book to teach that we can gain salvation by good works. But that is not what the book of James teaches.
• James teaches that people who have received salvation by grace will naturally do good works because of their faith.
• James refers to himself as a slave of Christ, meaning that he has no choice but to obey Christ since Christ is the ruler of all.
• James wrote the book to the Jews who had been scattered across the world.
• This is often called the Diaspora, or in common language, the Dispersion.
• 800 years before Christ the Jews were carried into exile.
• While some eventually returned to Israel during Ezra’s time, most remain scattered.
• Though out history the scattered Jews were often mistreated, ridiculed and persecuted.
• In 70 AD the Romans totally destroyed their nation, tore down the temple and scattered the Jews even more than they had been.
• The Jews had no nation to return to until 1948 when the United Nations re-established the nation of Israel.
• In the last sixty years many Jews have returned to Israel, which was prophesied in the Bible.
• Yet, even today only 42% of ethnic Jews live in Israel. Most are still scattered. Many are still mistreated, ridiculed and persecuted.
• The Lord tells us to pray for peace of Jerusalem. He promises that if we bless Israel, then we will be blessed and if we curse Israel, then we will be cursed.
• Though the Jews have been scattered across the world for centuries, they have a common bond through their history and beliefs.
• Likewise, Christians come in every color, language, ethnic group, economic class and educational level, but we are all connected together through the love of Christ, the communion of the saints and the Word of God.

Verse 2 - Consider it a great joy, my brothers, whenever you experience various trials . . .
• James tells these Jewish believers who had been scattered across the world and mistreated, ridiculed and persecuted to consider their situation a great joy.
• Do you wonder if James needed psychological treatment?
• Why would James say anyone should consider trails and hardships a time of joy?

Verse 3 - . . . knowing that the testing of your faith produces endurance.
• When our faith is tested, it produces a spirit of endurance in us.
• Why is endurance important?
• Because real life is full of difficulties and if we quit every time life gets hard, we will never accomplish anything in life.
• When we go through personal trials, we discover what kind of faith we really have.
• We must remember that every road has an ending and every journey has a conclusion. Likewise, every trial has a purpose.
• The problem with most American Christians is that we do not like suffering.
• American Christians see trials as something we should try to escape from.
• Many Christians, who, like the Jews, are scattered around the world living in less than ideal circumstances, realize that difficulties in life are not to be run from or avoided.
• Difficulties should be viewed as opportunities to learn, to grow, to increase our faith and to mold us into better followers of God.
• Sadly, most Christians assume that trials are about getting deliverance and they fuss and cry until the pressure lets up, then they go back to living however they always have.
• God’s intention in trials is not to produce an escape, but to produce a spirit of endurance.
• When Christians endure trials the way God intends, trials become testimonies.

Verse 4 - But endurance must do its complete work, so that you may be mature and complete, lacking nothing.
• The reason endurance is so important is because when we have learned to endure difficulty, we become mature.
• When we learn to endure difficulty, then we also know how to live better in times that do not include difficulty.
• People who have not experienced personal difficulty in their lives are seldom mature.

Verse 5 - Now if any of you lacks wisdom, he should ask God, who gives to all generously and without criticizing, and it will be given to him.
• The challenge of enduring difficulty is trying to figure out what it is that God wants us to learn from it.
• God says that if we are struggling to know what character traits or concepts we should be learning from our struggles, we should ask Him.
• God says that He will give generous wisdom to those who ask.
• Notice that God does not criticize us for asking Him what we are to be learning from our difficulties.
• In fact, the text seems to imply that God WANTS us to ask Him about it!

Verse 6 - But let him ask in faith without doubting. For the doubter is like the surging sea, driven and tossed by the wind.
• God gives us a warning concerning talking to Him about what we should learn from our difficulties.
• God tells us to ask Him in faith and not doubt.
• Those that doubt will be tossed about like a small ship on a big ocean during a hurricane.
• When we ask God for wisdom about our troubles, He will answer.
• But once He answers, we are then responsible to act upon what God has told us.
• The whole book of James is about ACTING out our faith, not just HEARING it.
• We may not always like God’s answers, but we must act on them.
• We may not always like the lessons God has told us to learn, but we must learn them and become better people as a result.
• Otherwise, we will just bounce back and forth between one idea and another, never really making progress in our lives.
• That is not a very good way to live.

Verses 7-8 - That person should not expect to receive anything from the Lord. An indecisive man is unstable in all his ways.
• People who ask God to show them what they need to learn and then refuse to learn it should not expect to hear anything else from God.
• God wants us to obey the LAST thing He told us to do BEFORE He tells us the NEXT thing to do.
• When we do not obey the last thing we heard from God, we become unstable.
• Not only are we unstable in our faith, but we become unstable in ALL our other actions.
• Our faith is the anchor that holds us steady during a storm. If we cut the anchor loose, there is nothing left to keep us upright in the storm.

Conclusion:
• Instead of running from our troubles, we should learn to endure them in a way that teaches us something important about life.
• When we struggle to see what we should be learning, we should ask God to show us.
• But when we ask God, we had better listen and obey His response to us.
• When we do this, we become mature in our faith and our life finds balance in the midst of the storm.

------------
For more spiritual truth on this same topic, consider the book "Malachi: Finding Hope in the Midst of