Many months ago 18 people from Faith Community Church, including teens, college students and middle aged adults, felt led of the Lord to become involved in a week long mission effort in Haiti. As the months went by, some people were added to the group, others had to drop out, but in the end 15 people flew to Haiti, to assist God’s Littlest Angels in serving orphans. 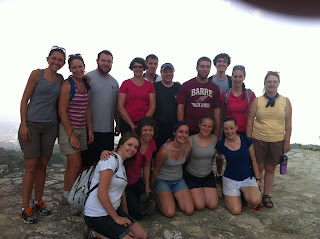 Our group flew out of Boston at 3 AM on Monday morning with 30, yes, thirty, bags. Each person had one personal bag of their own stuff and one bag filled with items requested by the orphanage. We arrived safely in Haiti but four of our 30 bags did not make it. We would not see those bags again until the day we left, which is when they finally arrived.


After a frightening, but as we were to quickly learn, quite normal, ride through the chaotic streets of Port au Prince, we made it to the orphanage, which is 45 minutes away in Petionville. They sent a van and a pickup truck to the airport to pick us up. Five of us rode in the back of the pickup with the luggage. Think of all your worst urban traffic nightmares rolled into one, then double it and close your eyes and scream and you will have the same experience we did driving from sea level to 4500 feet up a mountain through traffic that had no discernible rules others than the vehicle with the loudest horn had the right of way.


We got to hold some of the orphans for a while that evening. Then the ladies remained in Petionville, where the orphanage is. The guys had to travel another 25 minutes farther up the mountain to the town of Fort Jacque, where the new orphanage is being built. Though Port au Prince was hot, we were happy to learn that when we got that high up on the mountain there was a nice breeze blowing and it was not too hot.


On Tuesday we cleaned up the construction site where they are building six "toddler" houses. That particular orphanage considers children age 3-12 “toddlers.” Our work including hauling a bunch of lumber around and sorting it into correct piles, leveling out one pad for a foundation and digging a trench for a waterline. Digging the trench involved splitting a giant rock with a pick ax. And that was ALL BEFORE LUNCH!!!! The mission team worked very hard and I was quite proud of them for their servants' hearts.


We had beans and rice for lunch, which would be a daily occurrence. It was good, just a little spicy, but not too much for our American pallets. After a brief rest, we walked through the village, which was a cool experience, and then toured an old Haitian fort on the edge of the village.


In the afternoon we continued to sort the massive pile of lumber into what was still usable, and what needed to be burned. We also cleaned up all the rest of the property of various pieces of debris. There was quite a bit since they had built several buildings in the last few months and no one had cleaned the site up in some time. Some of the team did some weeding. Some of the team helped organize the supply barn. Some of the team cleaned and organized the generator area and equipment.


We had nachos for supper (yeah, in Haiti, isn't that funny!!!!). During supper we heard what sounded like a marching band playing out in the street. The missionary had us go look at the street and it was a funeral going by, complete with a brass band. The people were all dressed up in black and white. After supper we fellowshipped with the team and with the local missionaries before the ladies headed back down the mountain to where they were staying. The young men and I then started cutting up and burning the lumber that was not salvageable. We also were asked to burn a large assortment of other items that were broken or otherwise unusable. It was quite an assortment of stuff and let's just say they do not have any rules about what you can and cannot burn in Haiti. I am sure there is a growing hole in the ozone layer over the compound. By the end of the day our bodies were very tired, but our spirits were happy to have served the Lord.


I will share more of our journey in tomorrow’s post.
Posted by Dr. Terry Dorsett at 8:03 PM