red the "best" preemie care in the nation. We will spend the afternoon at the "toddler" house. The girls are looking forward to a day with the kids. The boys.....not so much..... they are afraid of diapers....well...actually they are more afraid of what is IN those diapers. But I think there is some painting they can dDay Three in Haiti started with the sound of children playing at the school next door. The entire school experience in Haiti is different than in the United States. Students have to buy uniforms and pay various fees. Those who cannot afford it are unable to attend. Forty percent of children across Haiti will never attend school at all. Others will attend for a few years. Few will make it all the waythrough school due to the financial challenges. Several people told us that the greatest thing we could do to help Haitians was to sponsor a child to help them attend school. Just as education in America is important to getting a good job, so is education in Haiti. 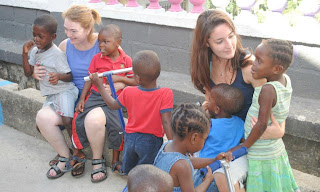 After a terrifying ride in the truck down the mountain, we played with 85 kids in the morning at the "Toddler House." At this particular orphanage, toddlers are age 3-12. It was amazing how many kids they had squeezed into such a tiny area, but somehow, they all fit as they played games and enjoyed being outside.
They normally only have 60 children at a time in the home due to space issues. But recently another orphanage was shut down by the government due to appalling conditions (rats were in the cribs biting the children and one child died from this) and all the children from that other orphanage were sent to GLA. Though GLA did not really have the room for all those children from the other orphanage, they took them all in anyway, that’s what love does. Love finds a way regardless of space, money, comfort, convenience. The staff at GLA overflowed with a deep and abiding commitment to love children no matter their circumstances or situations. Americans could learn a lot from the example GLA set.


After a Haitian lunch of beans and rice (which would be our daily lunch menu for the rest of the week), we helped care for 40 infants over at the Main House. GLA actually started as a baby orphanage and after it kept growing they added the Toddler House for the older children. GLA is one of the few orphanages in Haiti that will accept babies that are born pre-mature. Such babies often have a wide variety of health issues and require an extra-ordinary level of care.
They showed us the "preemie" room. It was about the size of a small bedroom. It had 6-8 cribs in it and two incubators with babies in it. Most of the equipment looked ancient. It is unlikely that any hospital in America would have been that crowded or under-equipped. However, that particular preemie unit is considered the most advanced in the nation of Haiti.


Each volunteer is assigned a certain number of babies for the week and part of their job is to spend one hour of personal time with that child each day. Because we had a large number of ladies on our team, there was only one little guy for me to play with. That little fellow and I had a lot of fun in the swing and playing with toys. And yes, I even changed a diaper, my first diaper change in 15 years, and I still remember how to do it. Let’s just say that it looked like honey Dijon mustard, but smelled MUCH WORSE!!!! I hope that little fellow remembers that he is greatly loved by the Father and that the Father sent a few earthly fathers to demonstrate that love until he can be placed in a permanent home.
After an intense day with the children, it was time to get back in the truck for another terrifying trip up the mountain. I do not understand why all the drivers in Haiti are in such a hurry when they get behind a wheel. Maybe they think they are race car drivers? When you consider that the “road” consists of a string of potholes perched on to the side of a cliff, the wild speeds and excessive horn blowing makes for quite the trip!


Back at the compound where the guys were staying, we had a relaxing evening around a campfire. Our security guard, Sergio, entertained us with great stories. We laughed so hard our stomachs hurt as he told us stories about his interesting diet. He said he likes to eat goat, chicken and cat. But he does not like cow. He said beef was too fatty. Interestingly enough, he said he could never eat a dog; they are too "nice." After listening to his stories, we decided we were glad he was not our cook! To our American mindset, it may sound terrible to eat some of the things people in Haiti eat, but when you are hungry, you do what you have to do to survive. Perhaps it is time for Americans to realize just how good we have it and stop complaining so much.
Posted by Dr. Terry Dorsett at 7:05 AM