On Saturday we visited the Baptist Village in Fermathe. The organization was founded in 1943. For more than 60 years they have shared the Gospel of Jesus Christ by partnering with local Haitian leaders and generous people in the United States and Canada. They have seen tens of thousands come to Christ, educated three generations of families, and saved the lives of countless children and adults throughout Haiti. They are building a better future and bringing hope where there has only been despair. I appreciate ttheir emphasis on self-help, instead of creating dependence. They encourage people to use better farming techniques so they can feed themselves. They have a store that sells hand made crafts and food items so the local people can support themselves. They also have a medical clinic and are involved in church planting across Haiti. Our visit there was inspiring. 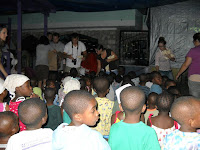 Later in the day we went back down to Petionville to the Toddler House at the orphanage. It was movie night and the children were to watch a children’s movie. But they were having trouble with the projector so they started playing some upbeat Christian music while they worked on the projector. The kids naturally started dancing and it quickly became a dance party. Picture 85 Haitian kids dancing to the music while a few white people from Vermont did their best to keep up. Who would have thought we would go to a kiddie dance party on a mission trip! Part of going on a mission trip is learning to be flexible. Things do not always work out as planned. Agendas get changed. Situations arise that might not have been prepared for. But effective mission teams learn to flow with the situation as it plays out and live in the moment. Our team did that and I was proud of them. Eventually someone got the movie going. It was projected onto a tarp on the wall of the orphanage. It was a Disney movie. In the middle of the movie the neighbors decided to have a REAL dance party and I could hardly hear the movie over the music from two houses away. That is also part of being on mission, realizing that others around us may not have the same value system as we do. So I prayed for the neighbors as I struggled to hear the movie.


After the movie ended we drove THROUGH the neighbor’s party, since it had spilled out into the road. That was interesting. Then we went up the mountain to the compound where we were staying. I definitely did NOT like riding those roads at night. Imagine hitting a refrigerator sized pot hole in the dark! But there was not much traffic at that time of night, so at least we did not have to dodge traffic in the dark. We did see one accident that night, a motorcycle somehow managed to get under a car. But the rider walked away unharmed. It was the only accident we saw while we were there, which was a miracle in itself. When we join God in His mission efforts, we must learn to rest in the safety of His arms. He will let nothing happen to us that is not ultimately for our good and His glory.
Posted by Dr. Terry Dorsett at 9:23 PM