Lower the Lights in Order to Raise the Voices 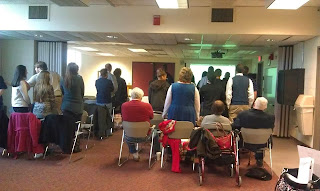 Yesterday I had the honor of worshipping in two different churches. Both of them are focused on reaching young adults. The two services were quite similar in nature. Both happened on college campuses. Students made up the majority of both congregations. Both churches had young pastors.


Though I do not want to read too much into one experience, perhaps this is something that we should think about in our churches. If a darker room with fewer distractions allows congregants to worship better, then we should consider lowering the lights and raising our voices to the King of Light.
Posted by Terry W. Dorsett at 7:00 PM