There is a spiritual movement happening across America. It involves thousands of young pastors willing to leave the security of larger established churches in order to start small missional churches in homes, storefronts, college campuses and other less traditional venues. These new expressions of the church often appeal to younger generations. They tend to focus more on community outreach and service to others than on forming committees that oversee programs that merely meet the needs of church members.

While many pastors in established churches have a negative view of bivocational ministry, church planters often embrace such a ministry as a way to interact with the community and gain "real world" experience. To be honest, bivocational ministry rarely leads to a lucrative bank account, but it does help the church planter survive financially until the church becomes strong enough to provide adequately for the pastor. In many church planting situations, it is the only avenue available for a new church planting pastor. 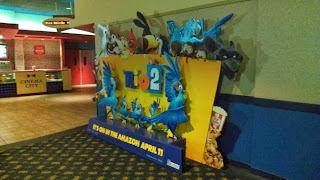 Yesterday I spent the afternoon helping a young church planter at his secular job. I had not planned on helping him, it was one of those things that just happened. His secular job is to set up movie displays at local theaters. He had mentioned to me previously about some of the cool displays he had built to promote various movies. Yesterday he had a particularly big project for an upcoming movie, and his wife was going to help him with it. He asked if I wanted to come along and help too. Since I had the afternoon free, I decided to join in the project. For more than two hours we sorted parts and pieces and followed pictorial instructions to create a massive 3-dimensional cardboard display to promote an upcoming children's movie.

At some point along the way I asked how much he was making to put the display together since it seemed like a lot of work. I was surprised at how little the pay was. A part of me wondered why a college educated young man with significant skills and experience would work so hard, for so little, when he could make far more on the staff of some established church back in the Bible belt. But another part of my mind knew the answer. He was doing double duty as both a pastor and a theater display installer for the sake of the Kingdom. God had called him to plant a church for young adults in the Hartford, CT area and one way God was providing the funds for it to happen was through this low paying job assembling displays. This young man saw it as a means to fulfill God's calling in his life. It says something about his commitment to the Kingdom. His small congregation may not appreciate his sacrifice, but I do, and so does the Lord. One day, when he crosses over into Glory Land, he will hear those words, "Well done thou good and faithful servant, enter into your reward." What more could a young minister long for?
Posted by Terry W. Dorsett at 7:00 AM