God Always Wins in the End 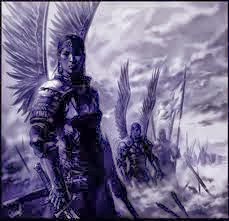 2 Kings 6:16-17 - Elisha said, “Don’t be afraid, for those who are with us outnumber those who are with them.” Then Elisha prayed, “Lord, please open his eyes and let him see.” So the Lord opened the servant’s eyes. He looked and saw that the mountain was covered with horses and chariots of fire all around Elisha.

Elisha was being pursued by the king of Aram, one of Israel’s long-time enemies. The king was upset because God had been revealing the king’s battle plans to Elisha through supernatural means. Elisha would then tell his own people those plans so they could intervene. The king of Aram sent horses, chariots and a massive army to surround the city where Elisha lived. The next morning when one of Elisha’s assistants woke up and saw the army, he could not imagine how they would survive the coming attack. Elisha responded by saying that “those who are with us outnumber those who are with them.” Elisha then asked God to open the eyes of his assistant so that the young man could see the supernatural army of horses and chariots of fire that surrounded Elisha’s position. Then God used a miracle to lead the attacking army away and as a result, the Aramean’s stopped raiding the Israelite territory.

Though many centuries have passed since that event took place, God is still doing supernatural events around us. We often get so focused on our problems and difficulties that like Elisha’s servant, we wonder in despair how we will endure. In those times we need to remember that God has legions of angels at His command. We need to remember that God has never been defeated in all of history. God has a plan and is working that plan out for ultimate good in the universe. We need to remember that God’s forces always outnumber the enemy and in the end, God’s side always wins. We need our eyes to be opened so that we can see what God is doing around us and take comfort in the power He has at His disposal to do things in ways we could have never dreamed. Our hearts do not need to be troubled. We need to believe in Jesus and look to Him for our hope!

Lord, help us trust You even when it seems humanly impossible for our situation to work out well. Amen.
---------