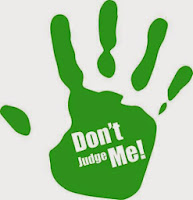 1 Corinthians 11:31-32 - If we were properly evaluating ourselves, we would not be judged, but when we are judged, we are disciplined by the Lord, so that we may not be condemned with the world.

Do not judge me! We hear it all the time. Pop singers who do perverted things on stage say it. Movie stars who get DUIs say it. Politicians who have affairs say it. Co-workers who show up to work with a hangover say it. Friends who have made a real mess of their lives say it. Sometimes, we say it ourselves when someone points out our obvious faults.

For the most part, our culture has accepted the idea that no one can judge another person for their behavior. In fact, at times it seems that our culture has become obsessed with the idea that no one should say that any particular action is wrong. If anyone does point out that someone's behavior was in poor taste, or just plain wrong, they are the ones who get criticized, not the person who actually did wrong.

I am struggling with this whole judgment issue. On the one hand, I grew up in a very judgmental religious environment in which we categorized everyone's behavior and separated ourselves from many people in our quest for purity. I want to avoid that type of Puritanical religion. On the other hand, some behavior is just plain wrong and we do not have to be a religious fundamentalist to recognize it. I do not want to be the behavior police with some mandate to classify every behavior that anyone around me does as being right or wrong. I also do not want to watch friends ruin their lives because I am too cold-hearted to speak to them about issues they are struggling with. Somewhere between the two extremes of never saying anything and always pointing out everything is the thin line that we should walk that shows care and concern without being judgmental.

I am not an expert in finding that thin line; it is a constant struggle in my life. One thing I have found that helps is to ask people questions about the things they do. By asking them questions about certain behaviors, instead of just telling them it is wrong, their own thinking is often stirred up. Sometimes they judge themselves and state their own need to change. This can lead to a redemptive conversation about Christ and forgiveness. Even if they do not recognize the behavior as bad, it still makes them think, and sometimes that is the best thing we can help a person do.

Ultimately, God is the one who judges all of us and He is the one who gets to decide what is good or bad behavior. Though many of our non-believing friends may not care what God thinks, it is our responsibility as Christians to help them get to that place. By asking questions that force them to admit their own position is wrong, we can move on to a place where we can share what God says is right. It may take several conversations, over a period of time, to get there, but we will eventually get there, without having to judge them a single time.

Lord, help us know when to say something to a friend about their behavior and how to say it. Guard us from having a judgmental spirit but also remind us of the importance of holiness. Amen.